So… what the heck is “Two Trickster Tango” about?

Posted on August 5, 2016 by marklondonwilliams

As the long road of production, art-making (Thanks, Doug!), rewriting — and have I mentioned production? — comes to a close, or perhaps a culmination, with the imminent release of the actual book, a lot of people are wondering what Two Trickster Tango is really about.

Is it, for starters, a graphic novel? Well, no, it’s a novel with graphics. A short novel. And cool graphics.

Okay. But still — what’s it about?

Well, lets have a sneak preview look at the back jacket copy, shall we?

What if John Steinbeck made a left instead of a right at Monterey, and wound up studying  Kabbalah instead of marine biology with Doc Ricketts?

Or Woody Guthrie wound up in a sweat lodge instead of a hobo camp, when he was riding rails out West?

What if Lon Chaney, in Hollywood’s silent film era, wandered onto the Cowboy-and-Indians set next door, and saw a wolfman who was really both wolf…and man?

Or at least, coyote?

Any of these wrong turns might have resulted in the tale you hold in your hands right now.

There are strikes brewing, baseball teams forming, outlaws still unrectified and scofflaws newly minted. And moons to be howled at and danced under.

And they’d love for you to join.

We hope that helps clear things up. Or at least, we hope it leads to the next good round of questions.

We’re gonna be a lot faster answering them, now.

Posted on January 5, 2015 by marklondonwilliams

So we are joining the fray of holiday “teaser trailers” here at Danger Boy central. And yes, this marks the first “fray joining” for the “Danger Boy” enterprise in many a moon.

But “coming next Christmas,” as they say (with a little bit of Chanukkah thrown in):

The light moves around some more, over me, and my two almost-jailers, then tilts up, over the Captain, Twain, and the guests who by now have probably given up on the idea of pretending tonight’s like any other Christmas Eve they’ve ever had.

Everybody squints and shields their eyes.

“Twain? Is that you?” says a voice from the dark.

“Why, with these whiskers I’m Father Christmas,” Twain says. “The two of us are always mistaken, much to my detriment.”

“An answer so dexterous I will take to be ‘yes.’” The voice from the boat gets closer to the ring of light, and there’s a man in a heavy leather coat, with tangled hair over his head and eyes that are a bit shadowy and deep.

Twain leans over and looks at him. “As long as the word you weren’t actually looking for was ‘maladroit?’ But I will take it in the holiday spirit. Though I need to ask — who is asking?”

“Why it’s me,” the tangled haired man says. “Jack London!”

“London?” Twain cocks his head. “Yes! The Gold Rush writer! The man who sends me dog-wolf stories! I see you managed to get some of them published in the magazines.”

“Dog stories?” The Captain shakes his head. “But there are already too many writers on board already.”

Two Trickster Tango Covers — How Do *You* Roll the Dice?

Posted on August 10, 2014 by marklondonwilliams

Things are beginning to “quicken” a bit at this end (there may even be some “Danger Boy” news in the works, but I, like you, am in “staying tuned” mode on that front, at the moment).

However, things are moving clearly, publicly forward on the “Two Trickster Tango” front. 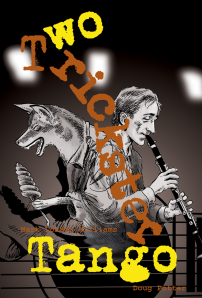 “Tango” involves a tale of two trickster figures — the Jewish one, Elijah, and the Native American one, Coyote, knocking around a Steinbeck-y California during the Great Depression (the one in the 30’s, I mean).

It’s a “picture book for grownups,” and Doug Potter has been brilliantly illustrating it for the last two years,  giving me no end of visually compelling Facebook posts as the artwork unfurled.

Now, as we get closer to finding the book its publishing home, Doug is working on covers. The first “variant” is the one on the left — showing Coyote and Elijah jamming a little (which happens in the book as well).

The second cover, which you see below to the right, shows another trickster — Raven — and takes a more “cosmological” view, perhaps evoking Shakespeare’s great line that “the odds is gone.”

Einstein may declare God doesn’t play dice with the universe, but with some of the latest physical theories positing that we may be a bubble universe on the event horizon of an imploding star — a black hole — in a four dimensional universe — well, who knows how our celestial odds are rolling?

As for the woman on the die face? That would be the Shekinah, and I guess a representation of her already marks this — if it wasn’t already — something of a scurrilous work.

So the question, reader, is which of these covers seems to jibe with you? Gets your juices jangling?, etc.

Posted on February 11, 2014 by marklondonwilliams

A coyote sighting seems like a good reason to revive this dormant blog.

I was out for an evening walk in one of the valley neighborhoods just downslope from Mulholland Drive.  And walking up a windy residential road, there it was: A coyote (you can kinda see it there in the fuzzy picture), standing under a streetlight. Or perhaps we’ll call it a “lamp,” since it was technically in someone’s front yard.

I hadn’t seen a coyote on a walk in a long time — not since I was out on the trails some months ago,  west of the house I finally moved from last fall.

Those coyotes came at a time where change was starting to roil around me — losses, lucky breaks, narrow escapes. 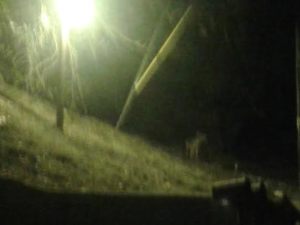 We will eventually see. But given that coming across a wild animal suddenly lurches you into a wakefulness, a present-ness (that later you wished you had for other moments in your life), all I could do is look. For a very long time.

It stood, sniffed the air, then started to… bark. The barking turned into a series of yelps. No other coyotes responded, but the neighborhood dogs got suddenly excitable.

The coyot’ turned and started to saunter up the hill, then stopped again to yelp, and look in my direction.

Finally, a lost pizza man wandered up behind me, holding an insulated bag of delayed food for one of the hard-to-decipher addresses. He asked me if I knew where a particular house was, but being a wanderer in the neighborhood myself, I didn’t.

When I turned back, the coyote was gone.

Walking  back to my parked car, I heard yips all the way down the hill.

Posted on October 31, 2011 by marklondonwilliams

I know I should be promoting the hell out of the “Danger Boy” eBooks — the downloads need to perk up, and have I mentioned we’re always looking for new/fresh user reviews?

But you know, as The Shaggs once sang, “It’s Halloween.”

So on that note, here’s an excerpt from a zombie-work-in-progress I’ve been revising (when not proofing eBooks), and generally taking far too long on, finish-wise. The set up? Our young heroes, Max and Aurora, have spent the night in a house, barricaded in a room (somewhere in the Burbank/Glendale area) and now get ready to leave L.A. for good, in Max’s go-kart:

We had to go to back through the kitchen to get out the door, where we’d left the kart parked by the porch.

Somebody had already gotten into the house, though, and was waiting for breakfast, too.

It was the boy, with the missing eye. “Little John,” Max whispered to me.

“Looks like him. A little.” I hoped the real Little John had had both his eyes. With the one the zombie had left, he blinked at us.

“Yrrrg?” he asked. Or gurgled, in a way that made it seem like a question.

“Do you think,” I whispered to Max, “that this was his house?”

I think it was pretty obvious what I meant, but I didn’t get to say any of that. Max looked around and grabbed a stool that had been thrown on top of the stove and partially burned. In one motion, he swing it and knocked the zombie kid on the side of the head, sending him skidding across the room.

Max got out one of his sharpened knives. “I wish I had more arrows,” he said. The zombie boy was writhing around, trying to get to his feet.

“What!?” He almost sounded angry with me. But I didn’t want him getting that close to something that could bite him. And there was something else.

The zombie kid hissed at us, as we ran out the back door. And by “ran,” I mean the kind of really fast limp I’d become good at in the last couple of days, with my sore ribs, and all my cuts and scratches.

We got outside to where the kart was. “Maybe we should have found a garage,” I said.

There were a couple of Z’s standing outside – an older man and woman. They were moving slowly, but I don’t know if that’s because they were old, or because the Z’s still moved more slowly in daylight.

Meriwether Lewis, by a campfire

Posted on October 6, 2011 by marklondonwilliams

so this begins an irregular, yet recurring series of snippets from the various Danger Boy books, as I read them cover-to-cover, back-to-back, for… well, the first time ever (I wrote them over a series of years, of course, but was mostly immersed with the book du year, as I was writing it…)

Lately, I’ve been combing through #3 in the series, Trail of Bones, where our titular time traveler, Eli Sands, winds up spending a lot of time with the Corps of Discovery, as Lewis & Clark & co. head west to find out just what and who are in these “new” (to European-Americans) territories Jefferson has purchased.

What follows is a fanciful snippet from Meriwether Lewis, in  a conversation he’s having with Eli around a campfire, as the Corps winters with the Mandan Indians:

“There is so much that exists outside ourselves, so much beyond our own experiences or viewpoints … so much life. It’s as if our very bodies, as if every thing, were filled with an unknowable essence, an energy, buzzing all the time, like swarms of bees on the prairies we’ve just crossed, crashing against every other bit of energy in the universe, all making an incoherent whole. Sometimes all of existence overwhelms me, Master Sands.”

Posted on September 28, 2011 by marklondonwilliams

Here’s the “Ancient Fire”-specific trailer, for the first eBook release in the Danger Boy series.

The artwork is by Doug Potter, who’s work you can find here:

The book is available on Kindle as we speak, and it’s coming for Nook — after a couple additional formatting hiccups get worked out!

Posted on September 19, 2011 by marklondonwilliams

The first of the Danger Boy books in eBook form, “Ancient Fire” is now available on via Smashwords, for non-Kindle formats (for you Nookers, iBookers, etc.!)

Posted on September 9, 2011 by marklondonwilliams

This going to be the blog place connected to the web place (why am I hearing “Dry Bones” humming in the background?) where we’ll update news & views.

To kick things off, here’s one of the trailers for eBook re-issue of the “Danger Boy” books: